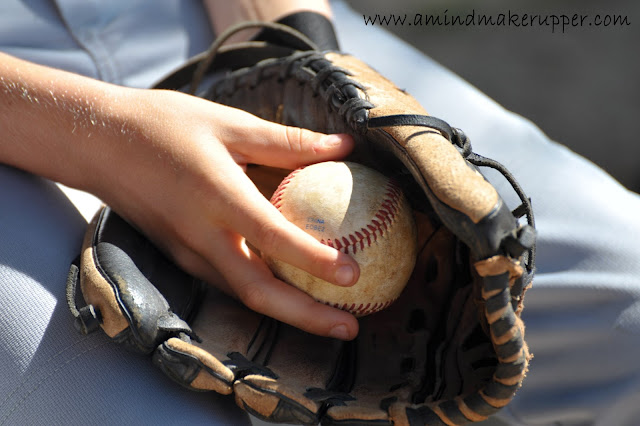 Two weeks ago I watched the most heart wrenching baseball game I have ever seen.  It was the first, and last, playoff game of the season for my nine year old son's rec team.  It was a match up between a winning record and a losing record.  Let me just clarify it for you a little further.  My son's team went into that game as THE underdog team in the league, having only won one baseball game all season.  Who am I kidding?  The season was pretty rough.  I didn't think it could get worse (and that's what I get for thinking).  The team was at the very bottom of the standings.  The numbers weren't good.

To tell you the truth, I prayed for those boys and their team before the playoff game.  They needed all the help they could get, and they really needed a boost to their spirits.  Morale was low in the stands and so were our expectations for a win, although we would never let our kids know that.  That being said, would you believe those boys played their hearts out that first night of the playoffs?  Go figure.  They played the best game they played all season.  Their spirits were alive on and off the field, full of hope.  Those kids had a spark in them that night that was beyond our understanding.

Before we knew it, we were at the bottom of the last inning, and it was  4-3, in our favor.  The other team was up to bat.  They had a kid on first and a kid on second with 2 outs.  Our kids could taste a huge, well-fought victory.  The boy up to bat hit a grounder to second.  Our second baseman caught it and threw it to third.  By a miracle, our third baseman, got the ball, stepped on the bag, and tagged the kid just before his foot was able to slide into third.  It was beautiful.  The ump called the kid out, and our kids went crazy jumping for joy!!  They had just won the ballgame by one run!  As the parents in the bleachers behind the third baseline, we could not believe our eyes.  We erupted in excitement  For a split second, it was awesome!  That was what it felt like to win, FINALLY.

And then it happened, the beginning of the heart wrenching part to this story.  Our celebration, all few seconds of it, was abruptly cut off by the loud screaming and ranting of the opposing coach who had come out of nowhere to third base to place himself in the faces of the ump and our poor little third baseman.  He and his blood red face were jumping off the ground with anger, for the whole world to see, insisting that our third baseman had only stepped on the bag and had not tagged the kid out.  With all due respect, the timing of our third baseman's tag was crucial, but we saw it with our own eyes, and the ump made the call.  The boy from the other team was out, and our third baseman kept insisting, "But I did tag him.  I did tag him."  In the ump's defense, that other coach was a really scary and disturbing sight for innocent eyes.  I am not sure anyone could have kept me in my seat had my son been the third baseman he was jumping all over.  But, with no way to look at a replay, our stands and coaches insisting the boy was tagged out, and an ump shaking in his boots, the ump reversed his own call.  The other coach had definitely turned his "ugly on", and it changed the course of the ballgame.

Stunned, we sat ourselves back in the stands, coaches resumed positions, and our kids put their hats on and went back on the field.  Bases were now loaded, and we still had 2 outs.  We finished the last inning with a tie ballgame 4-4 and had to play extra innings until there was a winner.  And the story continues to go further and further downhill from here on out (no pun intended).

In this league, to rest the kids' arms, pitchers are only allowed to pitch 3 innings per ballgame.  Extra innings meant we had already gone through two of our 3 pitchers, and the last pitcher HAD to finish out the ballgame without a backup.  Well, guess who the lucky kid was?  My son, of course, no pressure!  I was a wreck, and I hoped my son couldn't see my face.

We ended up playing a seventh and an eighth inning, holding at a 4-4 ballgame until the bottom of the eighth inning.  I am was not exaggerating when I said that other coach had turned the "ugly on" with his little escapade that sent us into the extra innings, and he kept it going for the rest of the ballgame, completely dismantling and unnerving our team and the ump.  Bless their hearts.  My son, who happens to be one of the smallest kids on his team, was forced to pitch through the unrelenting taunts and degrading comments of the other team, a team whose sportsmanship, to no surprise, mirrored the demeanor and character of their coach.  The kids and coaches on our team had done nothing to deserve the treatment they had to play through.  Two more times we thought we had finished the eighth inning with another tie, sure my son had thrown strikes, but the ump called them balls.  The calls just didn't go our way that night.  The opposing team finally scored a run on us, and we lost the ballgame.  Those kids, heads down, took off their hats, lined up, shook hands with the other team, and congratulated them on a good game.

I have never been prouder of that team or my son.  He is nine, and he played his heart out under extreme pressure, holding his own with grace and integrity way beyond his years.  I have no idea how my son was able to pitch those innings without breaking out in tears for all to see.  I have no idea how my husband and I were able to stay seated and refrain from ripping that other coach a new one (pardon the expression, it's the best I could do and still keep it clean).  That's how bad the unsportsmanlike comments were, to say the least.

I ran to the dugout and met my son and his teammates, who by this time, all had eyes full of tears.  As parents, we started clapping and telling them what a good game they played, but that did little to comfort those boys.  That ballgame was like the battle between David and Goliath, the giant and the underdog, except the good guys didn't get to win this time.  My heart was broken for those boys, in true Mom fashion, and my husband's heart was too, but he was furious, in true Dad fashion.

My son was just pleading and crying, "Mom, did you see my last two pitches?  They were strikes.  I know they were.  We should have won.  We should have won.  Those calls were terrible and stupid!"  Thank goodness for two cars that night.  I sent my crazy, mad husband home with the happy, cute two year old, and I hurriedly ushered my two older two sons to the car with me.  I knew we needed to get there and shut the world out.  As soon as we were all in and the doors closed, I answered my son.  "I know you should have won that game, buddy.  You played your heart out.  You played an awesome game," and the waterworks followed.  I just cried with my son.  I didn't know what else to do, and I knew this wasn't something I could fix.  His heart was broken, and that broke mine.

We did the only thing I knew to do.  We gave each other "a little lovin'" as we like to say, got ourselves together, and then we went to get milkshakes.  I let them order whatever size their little hearts desired.  I couldn't help it, and both boys ordered extra-larges, of course.  With milkshakes in hand bigger than their heads, their smiles bounced back on their faces, and we talked about the game the whole way home.

The way that other team won the playoff game, that was not how my son really wanted to win.  It truly isn't winning when you lose your dignity in the process.  Their horrible loss wasn't about the ump or the opposing coach, really.  The truth was, that ballgame was a reflection of a hard big-world reality, beyond our understanding.  Good guys get the raw end of the deal sometimes.  Bad things happen to good people.  People make bad choices and mistakes that impact the most innocent and precious of human beings.   All the faith, heart, and effort in the world cannot save us from mistakes, loss, disappointment and struggle.  We don't always get the fairytale out on the baseball field or in our relationships, in our families, in our jobs, in our finances, in our homes, but when we invite God to be a part of our circumstances, there is always hope.

No matter what happens to us, good or bad, we always have two basic choices.  We can face what is in front of us with God or without Him.  I am so proud of my son for letting God be with him on that baseball field.

5 Therefore, since we have been justified through faith, we[a] have peace with God through our Lord Jesus Christ, 2 through whom we have gained access by faith into this grace in which we now stand. And we[b] boast in the hope of the glory of God. 3 Not only so, but we[c] also glory in our sufferings, because we know that suffering produces perseverance; 4 perseverance, character; and character, hope. 5 And hope does not put us to shame, because God’s love has been poured out into our hearts through the Holy Spirit, who has been given to us.
Romans 5:1-5

Through faith, we know God is making us stronger in character, especially when we struggle with life, and we let God win, regardless of our circumstances, our odds, or the numbers stacked against us.  The real champions that night were my son and his teammates.  They may have lost the game by our limited worldly standards, but they walked away from the field with hearts overflowing, full of God's love, grace, and peace.  That's a win for our souls to celebrate, far bigger than any playoff game. 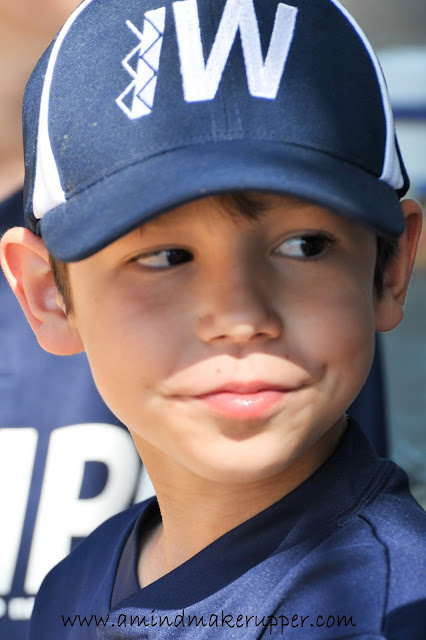 Please forgive me when I do not let you win in ALL of my life circumstances.  Strengthen my faith in you and give me the courage to face all that is before me with You.  Lord, I pray you will pour your love into my heart through your Holy Spirit and let me know your peace that surpasses all understanding.  Show me Your way.

In Jesus' name I pray,
Amen
Love in Christ,

Email ThisBlogThis!Share to TwitterShare to FacebookShare to Pinterest
Labels: baseball, everyday faith, God, Romans 5: 1-5, The Story Behind the Blog